A Cowboy and a Promise

Blackstone Ranch – Book 1 Ava Howell knows what it means to honor a promise made to her dying friend. Traveling from New York to a remote ranch in Texas threatens her new career and the familiarity of her life in the big city. Still, building a ghost town vacation resort would look great on her resume, even though it means tangling with the ex-military cowboy who is determined to stop her as soon as she arrives. 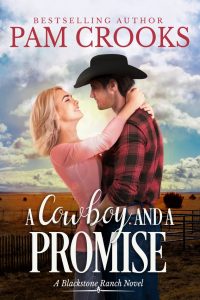 Beau Paxton needs to sell the land and ghost town to save his family’s struggling ranch. His resistance makes him an enemy to Ava’s determination, but the harder she works, the more his attraction for her grows. He doesn’t want to set aside his plans so she can succeed at hers, yet he finds himself doing just that . . .. Will a promise bring a city girl and a sexy cowboy together? Or will a broken one drive them apart? 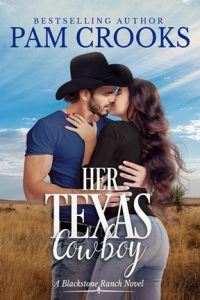 Blackstone Ranch – Book 2 Brock Paxton’s love life is suffering, but there’s no woman around who can cure him—until the raven-haired beauty in stilettos drives into town to help at his family’s vacation resort. Just his luck she doesn’t plan to stay, and though his gut tells him there’s more to her than she reveals, it doesn’t keep him from wanting her more than he should. Lucienne Dunn is in big trouble, and she has only one hope left to save herself. To please her father and set-up the scheme to buy precious land on the Blackstone Ranch, including the Paxtons’ prized resort, even if it means clashing with an ex-military cowboy… Except the Paxtons refuse to sell, and there’s danger on the ranch. How would it all end—and how would she live without Brock when it did? 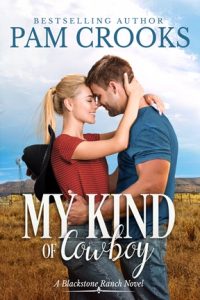 My Kind of Cowboy

Blackstone Ranch – Book 3 Shandi Flanagan has lived in Paxton Springs her whole life, and there’s no other place she’d rather be. Well, except on the sprawling Blackstone Ranch and married to Jace Paxton, the oldest son. Unfortunately, he barely gives her a passing glance…unless she’s handing him a burger and fries or a cold beer when he comes to the bar and grill she’s worked at since she was in high school. When the restaurant comes up for sale, she’s quick to want to buy it and vows to find the money somehow. But when her old house goes up in flames, she’s lost most of everything she’s owned. The only good thing to come of it? Being rescued by Jace when she needed him most. Jace Paxton finds Shandi in the nick of time. She needs a place to stay, and there’s plenty of room on the ranch. Just as she’s settling in and he begins to see her as more of a woman and less as the-girl-next-door, she gets another big scare…from the rustlers taking Paxton cattle. Together, they work to find the thieves responsible. Shandi learns her place is on the ranch and nowhere else. Jace can’t imagine not having Shandi at his side for the rest of his life.